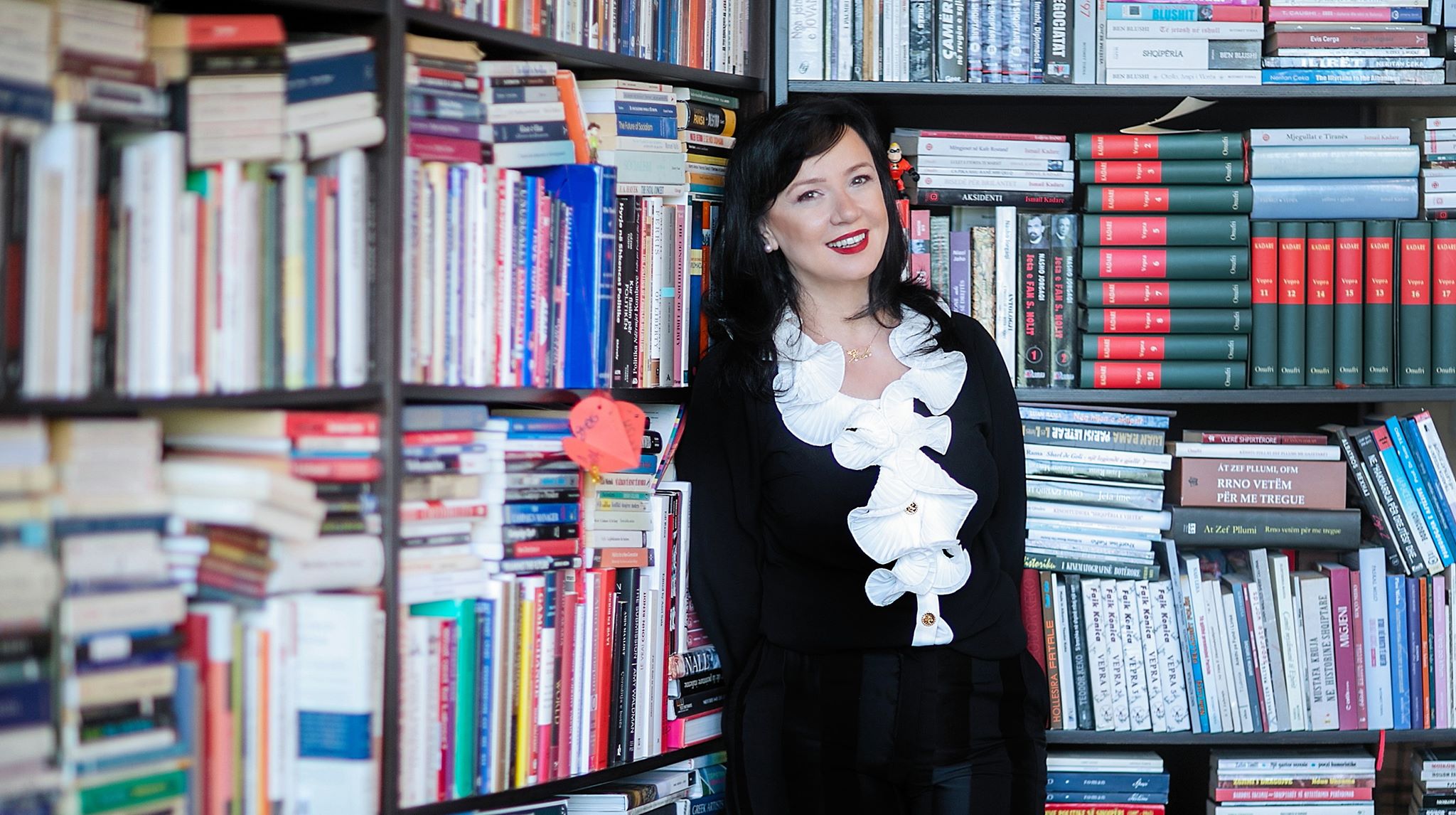 Before she was the wife of the Albanian prime minister, Linda Rama had already achieved a great deal in life by investing in her personal as well as professional development. Her current role is as far away from the storybook ideal as one could imagine; and during the last couple of years, she has significantly contributed as an activist on human rights issues.
Linda Rama believes that it is important to highlight the success of Albanian women in creating the best environments for them to thrive and express themselves and build on each other’s successes. With intelligence, integrity and intuition, she is confident in what she stands for.
She describes her greatest achievement as being able to keep intact during all challenges that life has put in front of her without losing her genuine sensitivity towards the world and the people she wants to serve. Linda Rama is convinced that Albanian women have never been more educated and empowered than today and she has a role to play in encouraging, listening and sharing a diversity of women’s voices across her country. With the dreams and ambitions of a developing generation, her lasting influence on Albanian women has the potential to be prodigious. Nowadays, Albania remains a beacon for resilience and optimism in the Western Balkan’ s world.

Our readers are very curious – what is it like to be the wife of the prime minister?

It is a unique privilege that the majority of the people of your own country believes in the leadership of a man you have chosen to walk together through life and share the responsibility of raising your children. At the same time, it is an enormous responsibility that makes you live constantly with a burden of concern that stems from the great desire to meet people’s expectations and the fear of losing their trust. It is a challenging opportunity to contribute for others from a special position, at a time where your country that has big hopes and dreams is faced with constant restrictions imposed by the past and the countless hardships that people have to deal with in their everyday. However, it is also a very peculiar type of limitation in your daily life that I would not dare call a sacrifice out of respect for those many people who sacrifice from their own position for their children and families, but nonetheless, it is considerably and relentlessly constraining.

What are your most important public engagements as the wife of the PM?

The profile of a Prime Minister spouse is a personal choice. In making that choice, my first and unchanged conviction has been right of the public to demand and get the deserved effective protagonism of the individual they have voted to be their Prime Minister, not that of the spouse of the government head. Edi took over as Prime Minister 6 years ago with an agenda of reforms that were quite overdue and equally arduous. Albania’s confrontation with a transformational programme that I would say has been impressive in all respects is quite onerous both in the public and political terms, as well as from an individual and family perspective. The pressure that comes from expectations and the strain in looking for results are part and parcel of such confrontation. I have tried to give Edi my unrelenting support within a beneficial protagonism, without ever leaving him alone, but not overshadowing him, being always myself both under our roof or the lights of public attention. 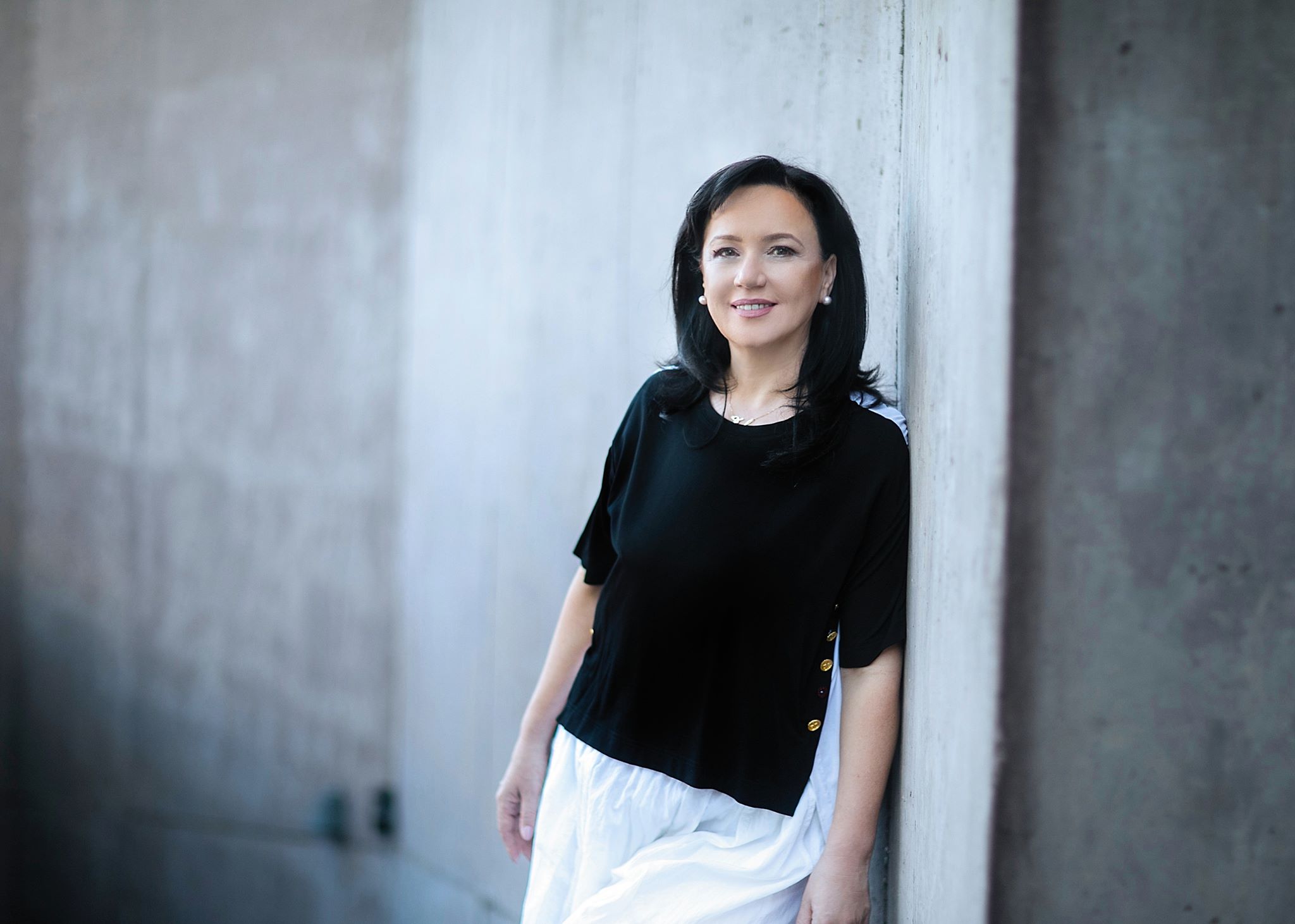 What would you acknowledge as your greatest achievement in life?

I have a beautiful family, with our three children who make its enormous happiness. In the meantime, my constant efforts to be educated and acquire knowledge through hard work and passion have been rewarded with remarkable professional results and the achievement of everything I aimed for both in academic and professional terms. Therefore, I can affirm that life has been generous to me. However, in addition to these two fundamental aspects for everyone, I believe that my greatest achievement has been to keep intact through the years and challenges that genuine sensitivity towards the world and the people, without letting cynicism affect me.

You need more women entrepreneurs in Albania. In the coming months, can we expect a special focus on helping women become entrepreneurs? What are some of the things women need to be aware of?

Albanian women have never been more educated than today. Only 5% of the women in the generation of our mothers could boast higher education, whereas now there are six times more girls between 25 and 39 years old who have attained a university degree. The number of girls attending higher education exceeds by far that of the boys, in a development that would have been unthinkable not many decades ago. As we speak, 30% of business administrators and owners are women and so are more than 40% of the company first-line managers. These figures are the result of a long-standing, arduous and constant investment in less-than-easy developmental and emancipating struggles that have taken place in the last decades, serving as an assurance and inspiration for every girl and woman in their individual endeavour to showcase their passions and ambitions. Girls and women should get to know and embrace their true nature, together with all the potential they carry within and be bold in taking steps ahead. They are doing it increasingly day by day, slowly but steadily, and that instils hope. 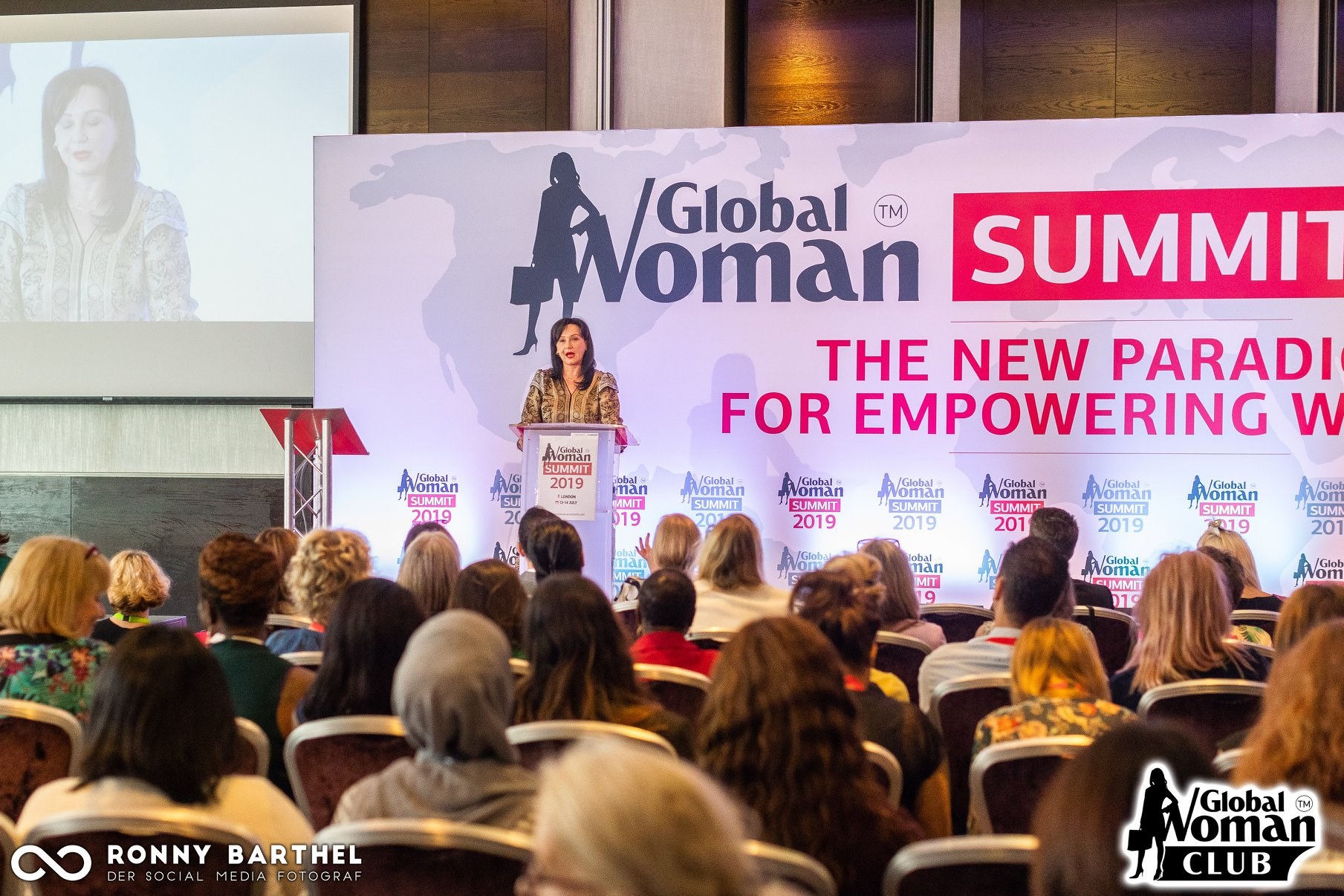 Note: Linda Rama was the keynote speaker at the Global Woman Summit 2019 in London this year, and last night she received “The Phenomenal Global Woman Award” – The award was give by Sue Ivory, the the Global Woman Club Director in Albania, meanwhile the wife of the deputy ambassador of the British Embassy in Albania.

In Albania you talk a lot about Albanian demographic dividend. What is your vision for the youth of your country ? What is your dream for them, and what are your expectations of them?

Allow me to be humbly proud of more than one million Albanians who emigrated in the post-1990s for their gargantuan efforts to educate their children who are today an integrated part of the societies in the European countries, the United States and even Australia. There is no doubt, on the other hand, that they are an added value to our country’s wealth of know-how, regardless the geographic distances. There are countless Albanian young people who are nowadays engaged at unimaginable levels, being the best ambassadors of a country that is an outright different place from the isolated nation of 30 years ago. The same enormous, heroic efforts have been made by the parents in Albania to educate their children. The amount of savings families have invested in their children education in Albania or abroad are outstanding to say the least. It is true that we are faced with brain-drain and an outflow of the skilled workforce in a world without borders that offers endless temptations to the youth who cannot stand to wait, but wish to move to countries with much more development and opportunities. It is a historical phase that combines both negative and positive traits for the future of the country. The Albanian young generation of today, both inside and outside of the country, is the first to carry no memories connected to communism, and is fully resonating with their peers in other countries thanks to the global and digital era they live in. This is a generation free from the complexes of the past that has many brilliant minds and all the required energy to take over the mission for an Albania with the best democratic and development standards. 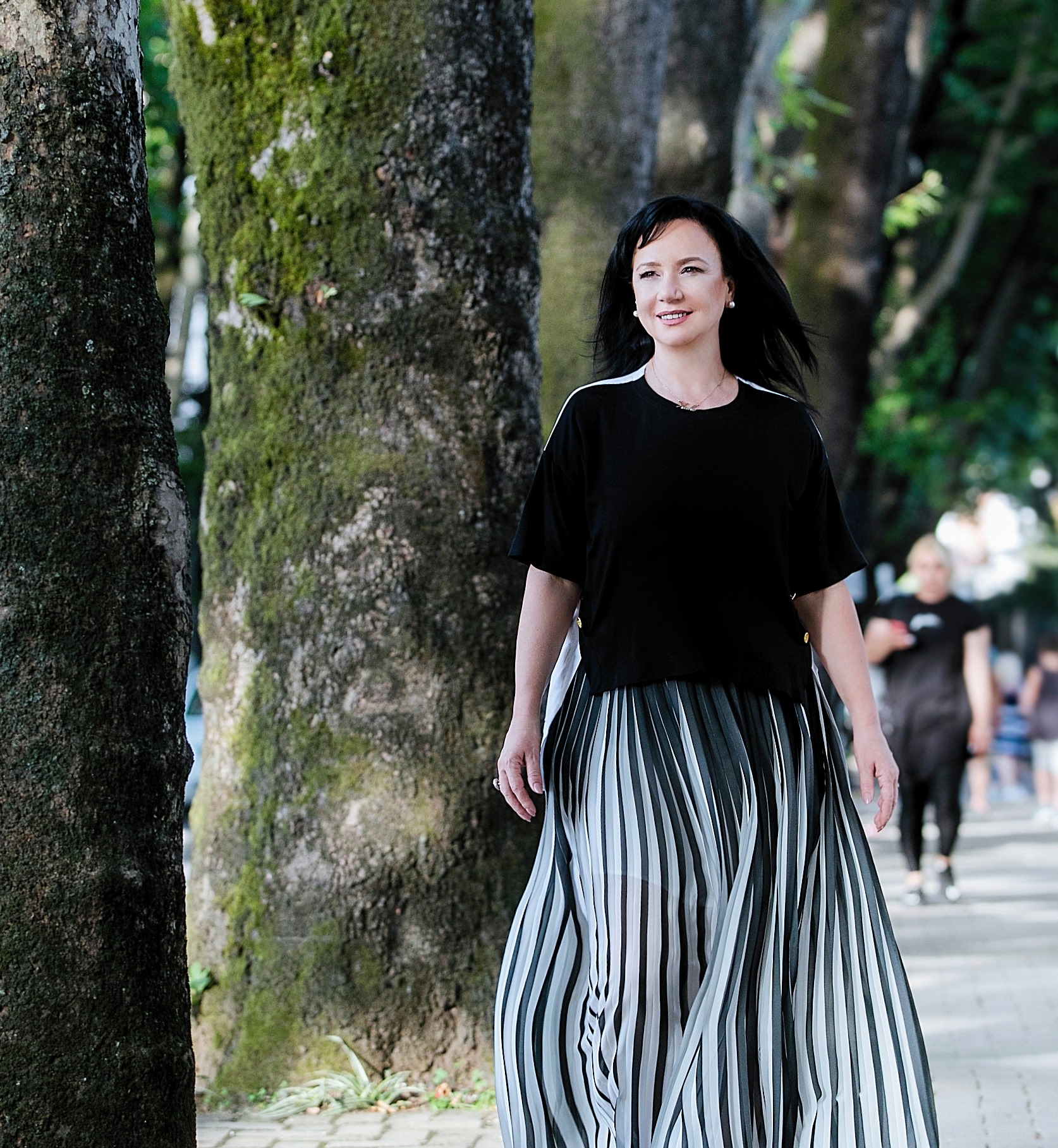 Young Albanians aspire to have a better life than what they have and also better than what their parents had. What is your advice to them? Are there some lessons from your own journey that you would like to share with them?

Differently from the circumstances of our generation and that of our parents, children today live in a time of endless opportunities, due to the global transformation and its hectic dynamics. This outpouring sea of opportunities bears also innumerable risks and a high degree of unpredictability for the future. The constant efforts to acquire knowledge and information, the curiosity to go deep into the essence of things avoiding the trap of superficiality, and the strive to preserve and nourish what is humane and the deep relationship between man and nature without letting technology and the lifestyle dehumanize and isolate us, are an ever growing challenge for the youth in this day and age, which they must win through willpower.

How do you see Albania will be received on the world stage in the next five years?

There has been striking transformations in Albania after the ‘90s and, in my opinion, that has been particularly evident in the last five years that have laid the foundations of a historic turning point even in the country becoming a tourist attraction. I believe that the next five years will make these foundations robust, ultimately opening the door to sustainable development for Albania. I wish that these upcoming years finally consolidate the European perspective through the opening of accession negotiations with the European Union. It might not seem much, but it feels certain that in five years Albania will break free once and for all of the ghosts of the past.

Grow Your Business With Feng Shui

What is more important: Individuality or Being Fair?

Are You Living Up To Your Passion?