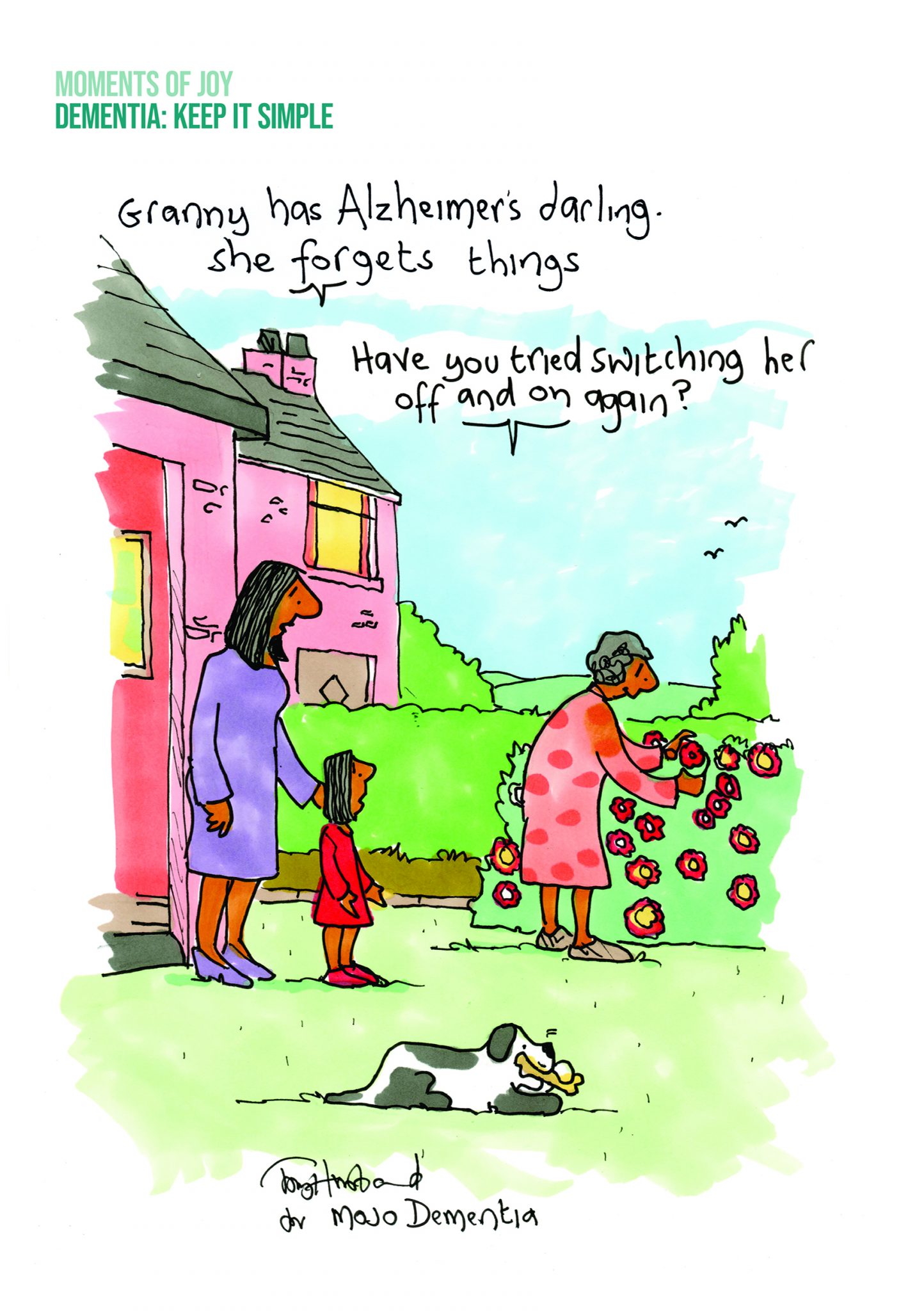 Dementia is the biggest cause of death in the UK, with over 850,000 people currently living with the disease. But unlike other critical illnesses, it’s the wider family who bears the burden of care, often with very little external support. To put it in context: There is an unpaid, untrained, largely unrecognised army of carers bigger than the NHS dealing with this dreadful journey on a daily basis.

MOJO Dementia has collaborated with legendary cartoonist Tony Husband to create an exclusive series that encourages a more open, light-hearted dialogue around the realities faced by so many families today. Subjects range from disorientation and ‘timeshifting’ to telling the grandchildren and creating a dementia-friendly home.

MOJO – short for Moments of Joy – is a ground-breaking new app developed to help families navigate their way through the difficult early stages of a loved one being diagnosed with Alzheimer’s, Parkinson’s, Vascular or other dementias. Families share access to a loved one’s profile providing practical advice and innovative tools designed to engage and support everyone involved from the grandkids up.

‘Our aim is to share the load, reduce stress and uncover more crucial opportunities for moments of joy. In this context, what could be more important?’  – Sasha Cole

John Thornhill has been at the forefront of e-business and online development since the late 1990s, founding numerous start-ups and corporate venturing initiatives. When John met Sasha Cole in 2019, she explained her philosophy and practical approach to dementia, and specifically the lack of support for the wider family network who so often bear the burden of primary care. John realised that his existing technology could be modified to create a 360-degree dementia support system, connecting all those involved through an app. From here the concept of Mojo began.

‘Most of us has seen the effect of dementia on the patient, but MOJO is for the family. For those whose daily lives are dramatically altered by the practical responsibility and emotional impact of a loved one’s dementia diagnosis.’

Tony Husband’s instantly recognisable cartoons and black humour regularly feature in national newspapers, magazines and books, including Private Eye, The Times, Punch, The Sunday Express and The Sun. In 2014, Tony illustrated a poignant record of his dad’s decline from dementia in a book called ‘Take Care, Son’. Since then he has become a recognised advocate for dementia awareness and works with institutions including universities and NHS to produce colourful and easily-understood dementia guides.

The provocative but positive exhibition, a collaboration between Tony Husband and MOJO Dementia held last week also featured the premiere of ‘Joe’s Journey’, a short film written by Tony Husband starring Sir Tony Robinson. The evening was filled with opportunities to meet the artists and contributors who aim to promote a more inclusive and positive approach to family dementia care.

A New Way of Social Shopping with ISAWITFIRST X TikTok.

Future-proofing: 5 women on how their businesses are looking ahead

Future-proofing: 5 women on how their businesses are looking ahead